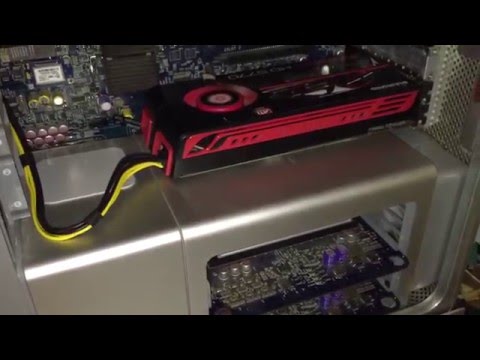 Hi, Ive been experiencing some fan spin-up issues on my Mac Pro 1,1 (late 2006 1st gen. Intel model). After posting at discussions.apple.com, I was encouraged to run Apple Hardware Test to test for any hardware faults. Unfortunately, ever since I replaced my old graphics card with a new one (The nVidia GeForce GT 8800 for Mac, which had worked great for years, 'burnt out', and Apple Corp. recommended the ATI Radeon HD 5770 as the best/only replacement option available for the Mac Pro 1,1), I've been having graphics card issues which prevent me from running (or more accurately, viewing) pre-boot processes, such as Apple Hardware Test.
The Mac Pro is fully updated, running OS X Snow Leopard, 10.6.7. It has 6 GB of RAM -- plenty for my purposes -- and I run system maintenance routines weekly to correct permissions, etc. In preparation to diagnose my fan issue, I went ahead and 'flashed' the PRAM, and reset the System Management Controller (SMC) for good measure.
I first noticed a change in the boot process after installing the 5770 graphics card. As everyone knows, after pressing the Mac's power button, a chime is heard. After a moment or two of darkness, the grey screen & Apple logo appear, followed eventually by Finder. Ever since I installed the 5770 however, the screen remains blank until JUST before OS X has fully loaded (sometime AFTER the grey Apple logo would ordinarily appear on-screen, but before Finder opens up).
At first, I didn't think much about it. Everything else seems to work just fine...until I tried booting (while pressing the 'd' key) from my system disc, to run Apple Hardware Test. As best as I can tell, everything loads up normally, except that I can't see it. After hitting power, and pressing 'd', the optical drive spins up, and I can hear that the system disk is being read, and then everything quiets down, and there I am sitting in front of a blank screen. I'm fairly sure the computer is not frozen because it responds to key combinations like 'control-command-option-eject', the keyboard shortcut for 'fast shutdown'.
I have experimented with various other start-up key combinations (like 'c', or 'command-option-p-r' to flash the PRAM, etc.), and have confirmed (just by listening to the sounds that the Mac Pro makes while it's booting, for lack of any visual confirmation) that those 'low-level' boot processes are in fact working properly.
My suspicion is that the new 5770 graphics card isn't being initialized early enough in the boot process, maybe as a result of the boot ROM upgrade that took place when I installed it. System Profiler identifies my current boot ROM version to be 'MP11.005C.B08'. A quick Google search confirms that this version is associated with Mac Pros which have been upgraded with the ATI Radeon HD 5770 graphics card.
So now I'm now stuck without the ability to run ANY kind of pre-boot diagnostics, etc. at ALL anymore. Additionally, I can't enable/disable my firmware password, because I can't see the EFI password prompt when I boot holding down the 'Option' key (After the brief 'Option'-boot period, it was clear that my system was doing one of two things; 1. Stalling/Crashing somehow 2. Booting to the EFI password entry prompt as it was supposed to, but failing to route that low-level process to the video card -- all I could see is the blank screen).
So, dear reader, thank you for having the patience to read about my problem. Not being a qualified technician, I understand that many of my assumptions may be speculative, but I believe that I've been thorough so far.
Fortunately, this problem is not debilitating for me right now, but I can foresee having troubles in the future (like when it comes time to upgrade the OS to Lion). If the ATI/Apple engineers haven't written a firmware/boot ROM fix (assuming that is what's needed) by then, Perhaps it will finally be time to buy a new computer :/
Please do not hesitate to re-post this on any other forum where you believe it might be relevant. Thanks in advance for any help you can offer!
-kapok
Mac Pro 1,1, 6 GB RAM, OS X 10.6.7, ATI Radeon HD 5770 GPU